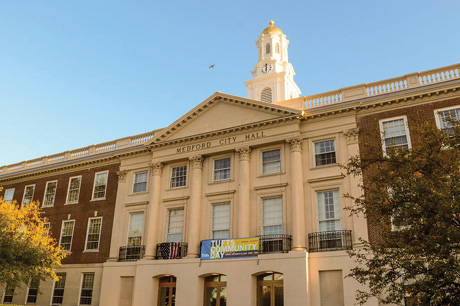 The Medford City Council passed a home rule charter petition Sept. 5 that, if passed by the Massachusetts state legislature, would ensure that Tufts and other nonprofits provide the city with institutional master plans.

The home rule petition was filed in the Massachusetts state legislature the same day by State Rep. Christine Barber.

Under a Massachusetts law, cities cannot require nonprofits, such as educational institutions, hospitals and religious institutions, to provide an institutional master plan. The same law limits the zoning power cities hold over such institutions.

The law, known as the Dover Amendment, allowed Tufts to easily expand its student housing through Community Housing (CoHo), which was previously owned by Tufts’ real estate arm Walnut Hill Properties and had served as housing for faculty and staff. The Medford Zoning Board approved this development last year; community members and lawmakers were frustrated by the lack of communication from Tufts.

The home rule petition would exempt Medford from the Dover Amendment and allow Medford to require an institutional master plan and impose zoning restrictions as needed.

“The City of Medford is hereby authorized to adopt local legislation imposing institutional master plan review to regulate the use of land or structures for land owned, leased or otherwise occupied by hospitals, health care institutions, colleges, universities, and non-profit educational corporations,” the bill reads.

Somerville passed a similar home rule petition that has now been refiled in the state house by Barber for the third time this spring, after failing to reach a floor vote in the previous two sessions.

Barber said that both petitions are essential to improving the relationships between Tufts and its host cities.

"Having both pending before the Legislature underscores the importance of such action, and shows that institutional master planning is important to multiple cities that house large institutions,” Barber told the Daily in an email.

"Hopefully we can get it passed by the state house with both Cities working on it!” Breanna Lungo-Koehn, vice president of the Medford City Council, told the Daily in an email.

In an email to the Daily, Patrick Collins, Tufts’ executive director of public relations, explained that while the potential of exemption from the Dover Amendment has prompted Tufts to examine its land use more thoughtfully, the proposal presents a challenge to campus planning.

"The Dover Amendment seeks to find a balance between preventing discrimination against educational uses while honoring local municipal zoning laws,” Collins said. “Any new project that the University proposes must go through a rigorous review by the building department, elected officials and our neighbors. For these reasons, Tufts University opposes any proposal like this home rule petition which would weaken our ability to make sound campus planning decisions to carry out our mission.”

Richard Doherty, president of the Association of Independent Colleges and Universities in Massachusetts (AICUM), Tufts’ lobbying group on Beacon Hill, concurred with Collins in a statement, arguing that an exemption would threaten the academic and religious freedom of private colleges and put them at the mercy of local zoning politics.

“AICUM supports the fundamental protections and balancing of interests that the Dover Amendment is designed to provide because it allows for both appropriate long-range campus planning and reasonable zoning regulations,” he said. “Introducing the unpredictability of a special permitting process to colleges and universities, as well as hospitals and health care institutions, would undermine that opportunity for sound campus planning.”

Erin DiBenedetto, a Medford School Committee member and longtime resident of the Hillside neighborhood whose daughter attended Tufts, believes the university’s lack of transparency about its planning decisions harms its host communities. DiBenedetto criticized the university’s expansion into Medford, referring to CoHo as the “Capen Creep” down the hillside.

"Tufts is creeping down the hill, taking two-family houses and converting them into dormitories,” she said. “If they were really transparent with the community, we wouldn’t feel like we have to watch everything they’re doing.”

Despite the positive attitudes of Medford’s elected officials, Somerville’s experience trying to pass its own measure in the state house gives little hope.

Somerville City Council President Katjana Ballantyne, who represents Ward 7 in the southwest of Tufts, said she has seen little development on the home rule petition.

"Five years ago, I proposed an institutional master plan requirement. It is the tool that a municipality has that allows us to have a conversation, a pre-planning conversation,” Ballantyne said. “What does the university anticipate that it will be doing? And I will say … we’re not any further on that.”

Ballantyne explained that of Somerville’s major developers, Tufts wields the most influence yet communicates with the city the least.

That influence has been felt nowhere more than on the issue of master plans. A Daily investigation last spring revealed that under University President Anthony Monaco’s direction, Tufts’ lobbyists played an important role in killing the last version of Somerville’s home rule petition in the Bills on Third Reading Committee of the state legislature.

"The for-profit developers are required to go through a community process to talk about what their future plans are so that we can anticipate what the impacts are on our community,” she said. “In the west here, we have no opportunity to have that five-year, 10-year look on what the university wants to do in order to anticipate what kind of impact they will have on our community.”

In Medford, residents and administrators tend to look to Somerville when deciding what the city needs from Tufts, DiBenedetto explained.

Housing remains a concern for residents of both Medford and Somerville. Lungo-Koehn said she was worried about Tufts’ enrollment increasing faster than its capacity to house students. Ballantyne echoed this concern.

"When I first started in my position as an elected official, I would meet with students occasionally, and … the number one thing they would always bring up is housing. In particular, it really started to erupt three years ago,” Ballantyne said. “Students were coming to me and saying how much they were impacted by the fact that they have to plan two years in advance to figure out what their housing is. The cost increase of living in Somerville is impacting them and absentee landlords [are] an issue.”

DiBenedetto stressed that the strength of the relationship between Tufts and its host communities depends on a commitment to cooperation from both parties.

Likewise, stressed that Tufts should be willing to work together with Somerville and Medford as its plans for development progress.

"Institutions play a key role in the cities where they are located—they bring many benefits and can pose some challenges. It is important that the relationships between the institution and the city are collaborative, especially as it relates to planning,” she said.